Most of the repair work I do is relatively routine. An amp breaks down, the owner drops it into the workshop, the fault is diagnosed and the amp repaired. Occasionally, however a particular job is anything but routine. I like to refer to these jobs as ‘projects’. Projects usually involve something I haven’t done or have rarely done before and often require a fair bit of research, sourcing rare and exotic parts and using a large chunk of my particular skill-set. As time permits I will be posting some of my more adventures projects. Please contact me if a particular project catches you attention in that it may be something you would like to do with your gear at some stage.

Extension speaker cabinet and conversion of Musicman combo into head and cab.

This project was all about converting a Musicman combo into a head and cab. The customer initially asked if I could simply cut the existing combo into two pieces. His back wasn’t so good and the combo was heavy. I suppose this would have been possible but Musicman amps are becoming rare and collectable and I don’t recommend modding gear (permanently) in this way plus it’s ultimately easier to do it the way I’ve done it here. He also needed a blackface Fender Bassman repaired and an extension cab made for it. The first thing was to measure up and build the appropriately sized cabs. The Musicman head has a particular shape to it above the control panel. I traced the original cab to replicate this on my box.

Next, lots of contact adhesive to stick on the Tolex supplied by Evatco (evatco.com.au) install the Fender ‘Silver Sparkle’ grill cloth and screw on the corners and handles. Sounds easy here but all this actually entails hours of work and dare I say it, a lot of skill. 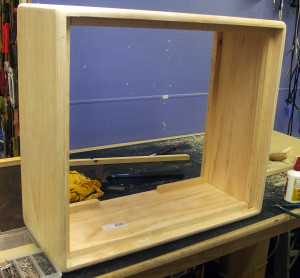 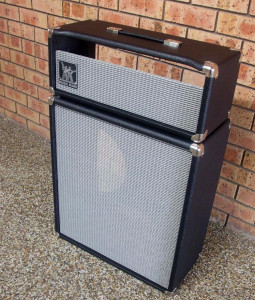 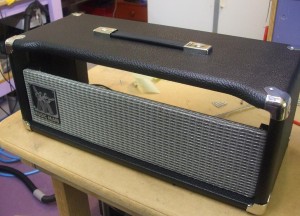 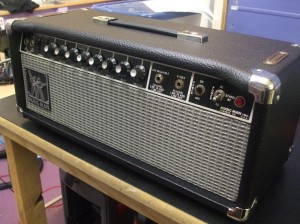 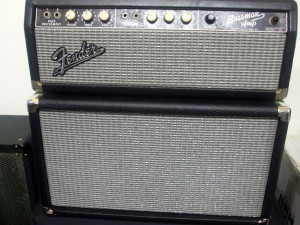 As with all projects there were a few glitches along the way but in the end everything turned out perfectly. The new cabs sounded fantastic, the Bassman was sorted and the original Musicman cab is still in one piece.

As I mainly repair amps rather than design and build them I never thought much about transformers. That is until the day a Fender blackface Band-master came into the shop with a faulty output transformer. What I usually do with vintage transformers gone bad, is get them rewound in Sydney by Alkay Transformers. The cost is not a whole lot different to buying new parts but usually it’s not about cost. It’s about getting the transformer rewound to the exact same specs so that the amp sounds the same as it did before it broke down. I had a new Band-master trannie in stock so I installed it and the amp, which was in pretty good condition sounded, well, like a Fender Bandmaster. My customer then made the decision to purchase a Mercury Magnetics output transformer which arrived in less than a fortnight from the USA. It was convenient I was able to hear this amp with the standard transformer and then install and test the new MM unit. The new MM transformer was quite big when compared to the original so it wasn’t too much of a surprise that the amp took on a whole new voice. The amp sounded much fuller and fatter and in my opinion, much more usable. Not too long after upgrading this amp, I bought a new Mercury Magnetics output and power transformer for my own stage amp, a Carvin BelAir (a.k.a. Nomad 50). The upside is the my amp has a very rich and ‘tubey’ sound, the downside is these transformers are bigger and heavier than the stock parts so there’s more weight to transport. I reckon its worth it, though. The following article shows what is involved in upgrading an Orange AD30. I also installed a choke which improves performance and re-used the redundant mains voltage selector switch as a Solid State / Tube Rectifier Selector Switch. 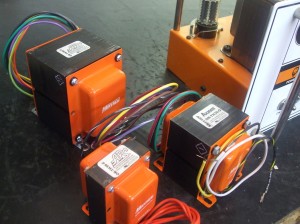 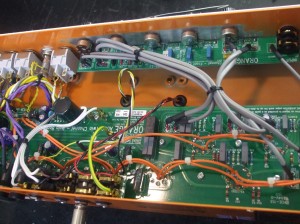 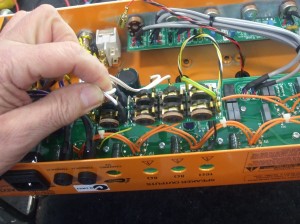 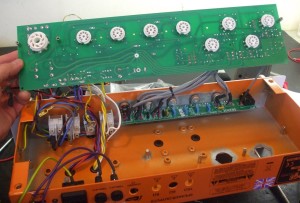 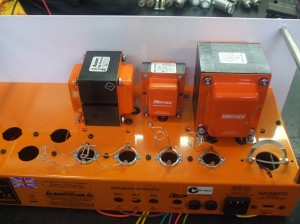 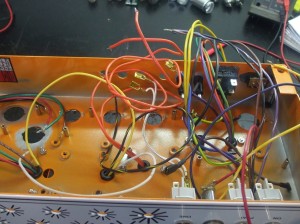 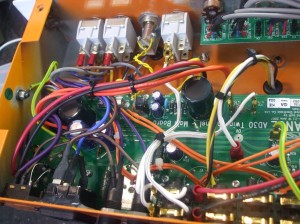 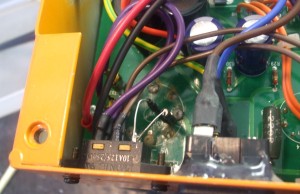 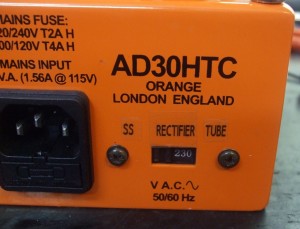 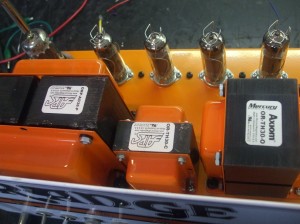 The amp turned out really well. Adding the choke stiffens the power supply and adds a little more clarity and headroom to the overall sound. A switchable rectifier gives a great variety of tones and makes for a very versatile unit.