ROCKDOG AMPLIFIER REPAIRS was established at Kiama Downs in 2002.

I had met Phil Haworth, owner of Haworth Guitars, when he was selling and repairing guitars in the basement of his home. I was working out of my garage in Nowra and had already been repairing amps and building pedal boards for many years when I dropped in to meet Phil in the hope he needed someone to fix amps for him.  As it turned out he did and I left his place that day with a couple of amps in the back of my car!

Eventually Phil’s business outgrew his garage and he moved into a shop at the Kiama Downs Shopping Centre. At his suggestion, I rented out an adjacent shop that had become vacant and after a few weeks or so I had built the workbenches, installed all my test gear, set up my computer and installed a comfortable lounge in the customer waiting area. The vacant shop had been transformed into a very functional amp repair shop.

In true corporate style, however, Haworth Guitars continued to expand and before too long, moved from Kiama Downs to their new mega store at Albion Park. I continued to work from the shop at Kiama Downs repairing hundreds of amps and assorted doo-hickies and whose-a-ma-watchits used by musicians.

In June 2013, I was approached by the CEO of Pegasus Venue Management to undertake a 12 month contract as Operations and Technical manager at the newly renovated Wollongong Town Hall. My duties there included repairing and maintaining an extensive lighting and audio system as well as setting up and running a variety of events and functions. I enjoyed the work and was thankful for the opportunity but was definitely missing the amps and their owners of the Illawarra and south coast.

So, 12 months goes by and the council in their desire to save money (and full credit to them for wanting to do so) did not renew Pegasus’ contract and handed the running of the Town Hall to the Illawarra Performing Arts Centre.  There was no question in my mind as to what my next move was going to be, for as soon as I knew what was happening at the Town Hall, I was looking for a new place to set up Rockdog Amplifier Repairs.

At that point in time I could have gone back to the old shop but I found didn’t need a shopfront and I was probably driving the neighbours crazy when testing out big amps at full volume! Thankfully, my friend and fellow musician, Mark Batley, came to my rescue and rented me space in his industrial unit at Unit 4/38 Investigator Drive, Unanderra. I left the Town Hall on the Friday and after a busy week of installing my workbench and all the bits and pieces one needs to fix an amp, I was ready to rock! 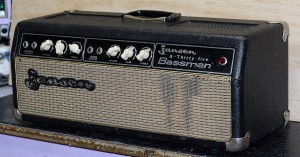 Fast forward to 2019 and although I was hoping it would never happen, I had to move once again. This time I was incredibly lucky as my good friends, Phil and Glenn Haworth have accommodated me in the new units they have had constructed at the Haworth Music Centre, Albion Park.
It’s great being a part of the team there and I’m planning to be repairing amps there for a good few years to come.